2020 is going to be an insane year for Commander players. New decks will be released alongside each main set release, signature spellbook has changed to become a commander focused product, and an innovative draft set based on commander will be released at the end of the year. These are huge changes that will overhaul the commander experience into something that we have never seen before. With this much change happening in Commander, I thought now would be a good time and review the history of EDH and the support that Wizards gave it. 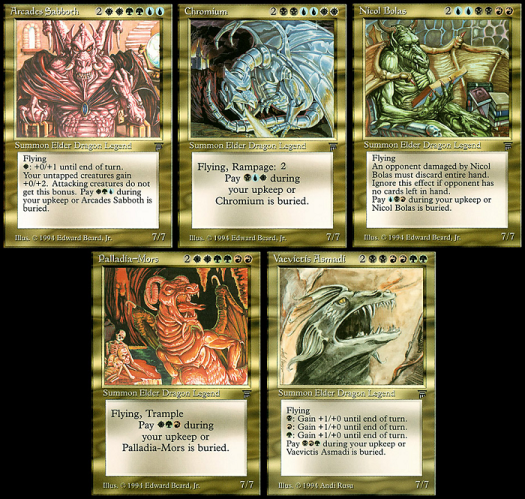 This is approximately the year that EDH was created and was inspired by an article in the Duelist magazine. This original format, created by Adam Stalely, only allowed 5 generals, the elder dragons of legends. At this time the only people who played this format were a small group of players in Alaska and it wasn’t until Sheldon Menery moved to Virginia that the format began to become popularized. Eventually, it was changed so that any legendary creature could be a commander.

Legendary creatures at this time in Magic were not made with much consideration for being a build-around card.

The Weatherlight Saga begins and brings a whole new suite of commanders along with it.

Even though legendary is meant to be a balancing mechanic, it can also be positive when other cards reference the type line.

This is the year that EDH first became popular among the judge community. Kamigawa also released at the same time and released 56 legendary creatures by itself, massively increasing the pool of available cards. EDH wasn’t recognized by Wizards at this point, which means that none of the Kamigawa legends were created with Commander in mind.

By 2007 EDH was an officially recognized format and cards that were designed with EDH in mind may have started making their way into the pool. By now the pool of eligible generals has doubled. Betrayers of Kamigawa and Champions combined released 61 additional legendaries (117 total for Kamigawa) whereas Ravnica released only 20 throughout the entire block. Time Spiral block was unique in that it doubled the average amount of legendaries the average set released, having 35 legendaries in total with many of them being the first wedge color generals magic has ever seen. This might have been in response to the desire for more legendary creatures, but this didn’t hold true for Lorwyn/Shadowmoor block which had 21 generals over 4 sets.

In the three years since 2007, only 43 new generals were added to the pool. During this time Alara and Zendikar block were added to Magic and the focus was not on legendary creatures with an average of 4 being added per set. Granted, many of the commanders added seemed to be geared specifically towards Commander play such as Rafiq and Mayael.

Kaalia of the Vast

Commander 2011 dropped this year and we got an additional 28 new legendary creatures. Fifteen of these came from the Commander set and provided unique and powerful legendaries designed for the format. The colors for each deck were also specifically selected in response to the lack of wedge commanders, and this product helped fill a specific niche that shows WotC was paying attention to the format. This was just the beginning of a decade filled with Commander specific cards.

Only 21 commanders were added this year, which is still a lot considering that no Commander set was released. Planechase 2012 edition helped bump up the numbers by including 4 new legendary creatures. Multiplayer was becoming a major focus of Magic at this time and it shows with the number of legendary creatures being created. This also marked the year of Commander’s Arsenal, the only time they have marketed products towards EDH players that weren’t specifically decks. That is until 2020 however.

Erebos, God of the Dead

This was another great year for Commander with 38 legends being printed throughout the year. Most surprising of all though, only 10 of these came from the commander set. This shows a shift in the design philosophy at Wizards where the average set is now allowed to have more legendaries. As for the Commander decks themselves, this was the start of the yearly release and was a time where Wizards experimented very heavily with the format. They introduced cards that worked from the command zone such as Oloro, and cards that got better along with the commander tax.

This year continues the trend of the supplementary product serving as a product for Commander as well as for limited, with many cards and reprints aimed at this group of players. The Commander decks this year were also Planeswalkers, an idea that the community had toyed around with for years but was never officially done. These decks were also all designed to be mono-color which provided many valuable tools for mono-color decks such as Myriad Landscape and Unstable Obelisk.

Alesha, Who Smiles at Death

Cards like Alesha show them exploring within the commander design space by adding cards with activated abilities that would let them have more color identity without impacting their limited or constructed play. Experience counters were introduced in this year’s Commander product and showed just how much design space was still available.

The first year that 4 color commanders were printed. If the Nephilim had been printed as legendaries this wouldn’t have been a problem. Partner was also introduced as another solution to the 4 color problem and provided many powerful combinations and even more design space that would be explored in future products.

Not every legendary is designed to be a commander. Razaketh is a card that works great in the 99 and isn’t necessarily meant to be the head of the deck. Commander Anthology was also introduced as a new product that allowed players to get their hands on old Commander decks. This year also marked when Commander decks stopped being a strict cycle based on the color wheel and went down to 4 decks. The mechanic this year was eminence, a riff of Oloro, that provided a lot of design space for each of their decks.

79 Commanders were released this year which shows how much focus commander is getting internally from Wizards. Two new products came out this year, Modern Horizons and the Brawl precons both introduced new legendaries and the main sets included a high amount of legendaries as well. This seems to be the norm going forward, especially with all the new commander products coming out. Commander 2019 provided us with generals focused on specific archetypes, much like last year, giving access to generals that specialize in fan-favorite mechanics like madness and flashback.

79 Commanders were released this year which shows how much focus commander is getting internally from Wizards. Two new products came out this year, Modern Horizons and the Brawl precons both introduced new legendaries and the main sets included a high amount of legendaries as well. This seems to be the norm going forward, especially with all the new commander products coming out. Commander 2019 provided us with generals focused on specific archetypes, much like last year, giving access to generals that specialize in fan-favorite mechanics like madness and flashback.

EDH has changed a lot in the last 20 years. A format that was started in a basement in Alaska has now become the most popular constructed format of Magic. We went from creating an average of 10 commanders per year to a minimum of 50. This trend is most likely going to continue as the demand for Commander is absolutely massive. Next year we might even break a record and have as many as 100 new legendary creatures created with all the supplementary products coming out. I would also like to thank /u/wildfire393 for providing some helpful insight that allowed me to create a better article.

There used to be a time where only ten commanders would be made a year. Cards wouldn’t be made with EDH in mind and your commander would be very unlikely to be out fazed as new cards come out. While some may pine for the early days of the format, Wizards of the Coast has discovered a new market that they want to tap into. If this is handled well, Commander could be in a great place at the end of 2020 with a whole new suite of legendary creatures and more exciting products to look forward to. I, for one, am hopeful that these new products are going to be a good thing for commander.